After studying Fine Art in Angers, Jean Larivière (b.1940) embarked on experimental artistic research, mixing various media such as photography, painting and cinema. Supported by surrealist painter Roberto Matta for his animated work 'Jamais Toujours' (1960–1970), Larivière laid his foundations in experimental cinema as an assistant to Chris Marker and got the opportunity to share projects with Salvador Dalí. His artistic universe – characterised by the dualism between naive reverie and strong technical engineering – granted him access to the advertising sector of photography. From the 1970s, Larivière’s visual research quickly became a photographic reference for magazines. His originality, and the delicate nature of his creations, caught the attention of Louis Vuitton in 1978, a year that would mark the beginning of a collaboration lasting more than thirty years. Like a globe-trotter, Larivière crossed continents to shoot the Spirit of Travel campaign. This work helped consolidate Louis Vuitton’s international renown, and the name became synonymous with quality, prestige and the art of travel. At the same time as that campaign, Larivière regularly collaborated with Vogue, Jardins des Modes, Égoïste, Citizen K and Actuel. His clients included big brands such as Van Cleef, Lanvin, Mercedes, Nina Ricci, Charles Jourdan, Laffite-Rotschild, Montana and others. His work also included reportage: on pollution in Czechoslovakia for Actuel; on the thermal baths of Budapest for Glamor; on Pagan in Burma, with a report on the fabulous site of ancient temples for Patrimoine 2001 under the aegis of UNESCO. Since 2004, Larivière has continued his plastic research into the notion of portraits and identity, granting us access to his personal mythology. 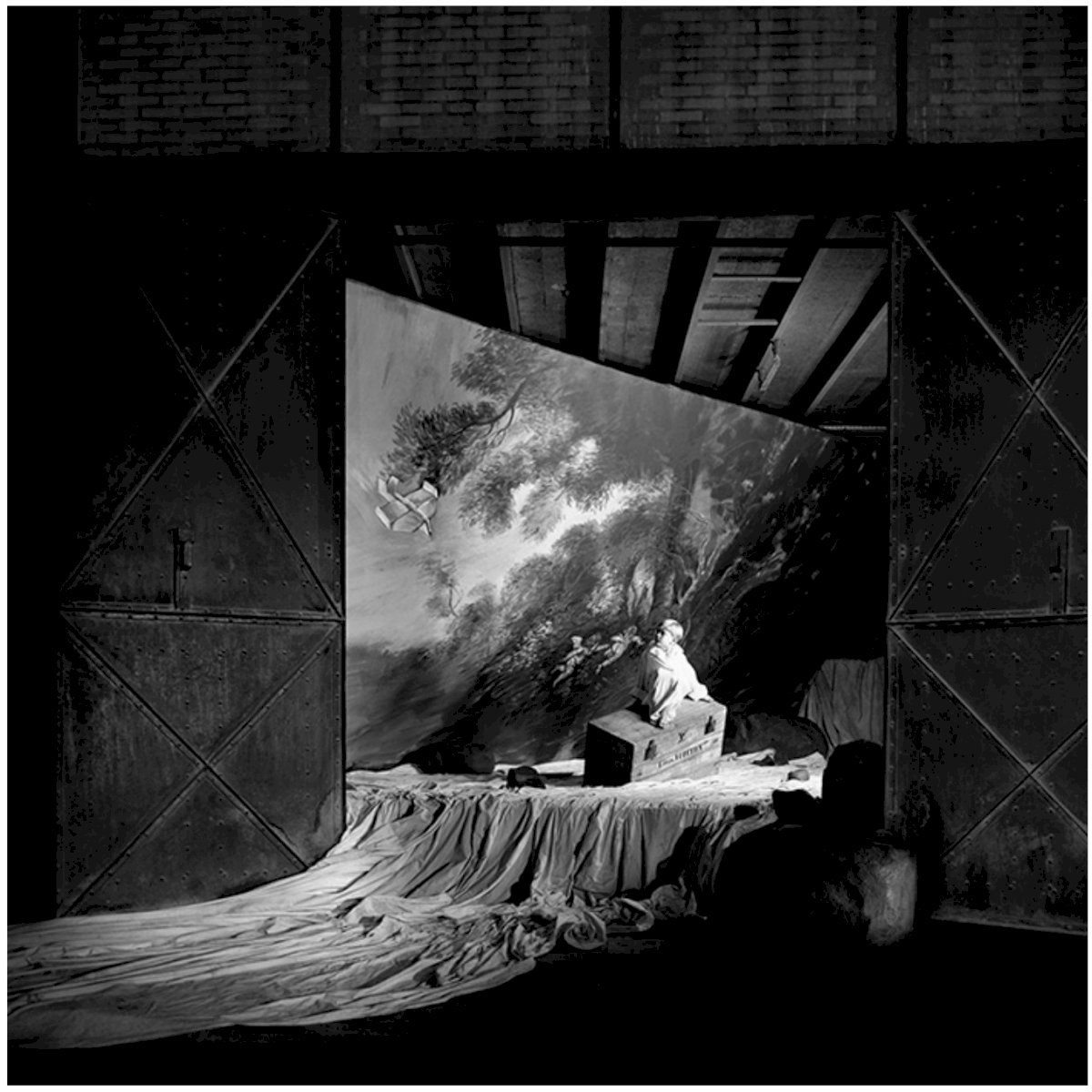 The Helicopter Gate
“When I started to create the images for ’The Soul of Travel’ - which the president of Louis Vuitton gave me carte blanche - I proposed a series of photographs that would accompany and push the campaign towards an artistic vision. I called it ‘The Work of Vuitton’. This photograph is part of the first series that I named ‘Asnières’, produced in the ateliers of the Louis Vuitton house. There was a gigantic metallic gate which led the workshop to the street. I opened it and transformed it into a theatre stage. I noticed that the floor was looking like ‘un plateau de pesée d’octroi’, and asked Patrick Vuitton about it. He explained that this plate was the platform of a freight elevator that allowed them to take out a wooden helicopter made by them. At the time, there was a meadow in front of the house where their helicopter would hover and tumble down; the debris would be brought down to the basement via this elevator. As a backdrop, I used a François Boucher scene painted by my decorator Patrick Chauveau, and added a paper flying machine, transforming the floor of the scene into a waterfall. I found a wooden case resembling a Louis Vuitton trunk and got permission from the President to cut it up to give the impression that it was floating over this waterfall, and to place little Prince Vuitton on a lake trip. I named the photo ‘The Helicopter Door (La Porte de l’Hélicoptère), and wrote a short story which was published in Vogue magazine.”

I just finished taking pictures of the old factory. I found myself alone and went out to the garden. The grey twilight darkened that cold October evening. Torn between my excitement of presenting my work and the melancholy that always accompanies the ending of an adventure, I was pensively walking in the damp grass, when an obscure intuition led me to take a final tour. I went up to the attic where a faint light still filtered through the high bay windows. In the silence, the colossal still life that I had photographed stood before me. Only the two little plaster cats were lit by the faint light. They bid me a silent farewell. My thoughts flew to Chris: of course he had been by my side since five years of retirement. I turned sharply on my heels and descended the two floors. The ground floor was now almost dark, and, stumbling against an object, I fell flat on my flat. The surprise passed, I got up and sat on an old trunk to come to my senses. My eyesight slowly accustomed to the dark and the magnificent set by Patrick Chauveau gradually emerged from nothing. The iceberg mingled with the trees and the trees in the grand painted sky. It was so beautiful that I began to dream. Then came the apparition that ripped me out of my state. At the left corner of the large glass roof where, for half a century, on avait entreposé les peaux, a soft light began to shine. Suddenly, in its centre, a young girl’s face formed. My first impression was that she was between six and twelves years old. Elle avait un front en médaille, a small spirited nose and big blue eyes. Her long, light blonde hair was pulled back into a single, neat braid. The mouth was more plump than one could imagine on such a face. Finally, she held in her hand two metal letters: L and V.

Amazed, I remained glued to the trunk; then everything rushed. The face began to grow disproportionately, filling the space with his presence. It felt like he was right next to me, as if projected on a giant screen. The eyes appeared smaller and sharper than before. They were a steel grey, et le regard qui me transperçait sans me voir était brillant d’intelligence. The hair had taken on a brilliant, shining silver and I suddenly realised that this face might well be forty years old although it was still the face of the little girl. The apparition continued to grow and its dazzling light both engulfed me and produced a feeling of absolute happiness surged through me. Then it all disappeared and I found myself alone. At first, I had the impression of having lost everything but as the factory and its decor reappeared, the despair gave way to a certainty: I had always known this face, and without doubt I would see her again. I got up, crossed the courtyard, started my motorcycle and drove down rue de la comète. The engine purred calmly in the night; la lente mélopée des réverbères me conduisit jusqu’à la porte de Champerre.

In the monumental fireplace that sheltered the little prince Charles d’Orléans during the long hours of that winter day, the fire was dying. A log creaked and Léonard, looking up from his work desk, cast his glance through the window. He then saw her for the first time. It was not so much the solitude of the child lost in the middle of this large French garden than the mystery emanating from her silhouette that marked Léonard forever. L’hiver s’acheva, le printemps chavira et l’été vint avec ses soirées immenses où la lumière de Touraine déclinait paisiblement dans le grand atelier en enfilade. Léonard was happy: the drawings and sketches of the canal which would transform France into a giant Venice piled on the table, above all, almost every day, the mysterious child appeared. She moved from tree to tree in the orangery planted by Pacello and the strangeness of her paths intrigued the old man more and more. There was something magical about her movement in circles, lines between crosses and arabesques. Léonard took note of it day after day.

That afternoon, he waited for her to come with perhaps a little more impatience than usual when, emerging from the depths of the alley, she finally showed herself. She came so close that he was transfixed by the steel glow of her gaze and then he understood it all. With the stroke of the pen, he joined the points of the child’s various appearances, and amazed, he saw his initials: LV. Cette énigme obsédante, c’était à lui qu’elle l’adressait. He looked up and smiled at her… she was gone. Months went by. Léonard did not know it but he was a few days to his death. He walked over to the mullion window in his bedroom. Recently, he had let himself every day be invaded by memories of his life, some precise, others seeming to be from an unfulfilled dream. His eyes rested on the familiar landscape that was vanishing into the fading daylight. The tuffeau walls of Saint Hubert’s chapel adorned with orange light. In the distance, the water of the Amasse river rolled. The majestic sun disk slowly glided towards the rectangle pond. A dazzling ray was born in their meeting, hitting with full force Léonard, who suddenly remembered: the enigmatic child, he had seen her before. It was 1456; he was four years old at the time. That evening, he was playing near the village of Vinci when he discovered her at the end of a steep path. Debout sur un talus, she turned her back to him, comtemplating the June sky which was gently basculait in the night. When she turned back, her frail silhouette radiated a halo of gold and silver; son regard transperça l’enfant Léonard qui vit alors ses cheveux se dénouer et remplir l’espace. Then, rising majestically, she vanished into the heavens. Halley’s comet was on its way to a new journey. The old man left the window and laid on his bed. As he fell asleep, the soul of the journey lulled him and he heard himself whisper: ‘Look at the light and admire its beauty, what you have seen is no more, what you will see next is not yet.’”